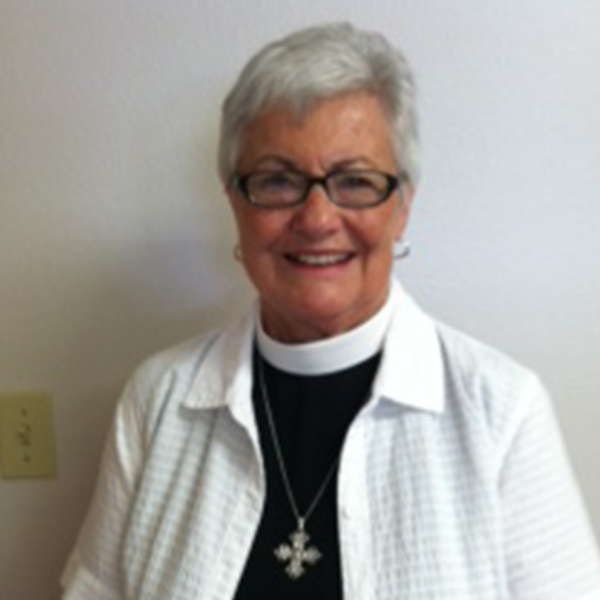 It began with a conversation around the kitchen table where my husband, Rick, our Rector and I sat discussing the imminent departure of a parishioner for his first year of seminary education. Somewhere along the way, I blurted out that this was exactly what I’d love to be doing, given the chance, voicing what had been rumbling around in my subconscious for a long time…..and the rest is history. That call was answered many years later when I was ordained a priest in the Episcopal Church. I have served in several churches since that wonderful day. Now retired, I continue to help when needed in our parish.

The passage from white, middle-aged, married-with-children-and-spouse woman to ordained female priest was fraught with crises of self-confidence, some therapy, several moves because of my husband’s work, (necessitating changes in diocesan jurisdictions) and the challenge of negotiating a system that was still uncomfortable with the idea of women, especially older women, serving in ordained capacities in the Episcopal Church, both at the parish and diocesan level. There were expectations of how a female priest should function that differed widely from my own sense of how God would use me. The Church at large seemed to be seeking executive, CEO types, with assertive personalities and breezy self-confidence. I, on the other hand, felt called to a ministry that also included pastoral and teaching functions in the service of a congregation’s spiritual development. These qualities are not mutually exclusive, but felt so at that time.

I have been blessed with wonderful male and female colleagues, and have been given many opportunities to practice the ministry envisioned way back in my seminary days when the prospect of ordination seemed remote indeed. Thus, by God’s grace has my life been blessed.